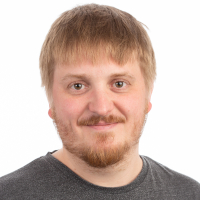 Over the last year and then so, Collabora has been working with Microsoft on their D3D12 mapping layer, which I announced in my previous blog post. Last July, Louis-Francis Ratté-Boulianne wrote a status update, but a lot has happened since then, so it's time for another update.

We’re excited to share that the we have recently passed the OpenGL 3.3 conformance tests, and have upstreamed the code in Mesa 3D!

It might not be a big surprise, but one of the motivation for this work was to be able to run applications like Photoshop on Windows devices without full OpenGL support.

I'm happy to report that Microsoft has released their compatibility pack that uses our work to provide OpenGL (and OpenCL) support, Photoshop can now run on Windows on ARM CPUs! This is pretty exciting to see high-profile applications like that benefit from our work!

First of all, I would like to point out that having passed the OpenGL CTS isn't necessarily the same as being formally conformant. There's some details about how to formally becoming conformant on layered implementations that are complicated, and I'll leave the question about formal conformance up to Microsoft and Khronos.

Instead, I want to talk a bit about passing the OpenGL CTS.

Issues with the OpenGL driver itself that leads to tests failing is always required to be fixed before results are submitted. Issues with the hardware generally requires software workarounds, but this is not always feasible, so Khronos have a system where a vendor can file a waiver for a hardware issue, and if approved they can mark test-failures as waived, and the appropriate failures will be ignored.

So far so good.

But for our layered implementations, our world looks a bit different. We don't really see the hardware, but instead we see D3D12 and the D3D12 driver. This means our sources of issues are:

For the OpenGL driver, the story is the same as for a non-layered implementation, but from there on things start changing.

Problems in the D3D12 run-time must also be fixed before submitting results. We work together with Microsoft to get these issues fixed as appropriate. Such fixes can take a while to trickle all the way into a Windows build and to end-users, but they will eventually show up.

But for the D3D12 vendor-driver and below, things gets complicated. First of all, it's not always possible for us to tell vendor-driver issues and hardware issues apart. And worse, as these are developed by third party companies, we have little insight there. We can't affect their priorities, so it's hard to know when or even if an issue gets resolved.

It's also not really a good idea to work around such issues, because if they turn out to be fixable software problems, we don't know when they will be fixed, so we can't really tell when to disable the work-around. We also don't know exactly what combination of hardware and software these issues apply to.

But there's one case where we have full insight, and that's when the D3D12 vendor-driver is WARP, a high-performance software rasterizer. Because that component is developed by Microsoft, and we have channels to report issues and even make sure they get resolved!

When developing something new, there's always going to be bugs. But usually also when using something existing in a new way. We encountered a lot of bugs on our way, and here's a quick overview over some of them. This is in no way exhaustive, and most of our own bugs are not that interesting. So this is mostly about problems unique to layered implementations.

It turned out early on that the DXIL validator in D3D12 had a requirement when parsing the LLVM bitcode that required that the amounts were always 32-bit values. While this seems fine by itself, LLVM itself requires that all operands to binops have the same bit-size. This obviously meant that only 32-bit shifts could pass the validator.

Microsoft quickly removed this requirement once we figured out what was going on.

In D3D12, one requirement for block-compressed textures is that the base-level is aligned to ther block-size. This requirement does not apply to mip-levels, and OpenGL has no such requirement. This isn't technically speaking a bug, but a documented limitation in DirectX.

Something that has been much more frustrating is bugs in the vendor-drivers. The problem here is that even though we have channels to file bugs, we don't have any influence or even insight into their prioritization and release schedule.

I think it suffice to say that there's been several reported bugs to all vendors we've actively been running the OpenGL CTS on top of. We believe fixes are underway for at least some of this, but we can't make any promises here.

Having these multiple independent implementations of DirectX drivers passing in conjunction with the Mesa/D3D12 layer shows that we are able to implement GLon12 in a vendor-neutral way, which allowed us to bring the layer to conformance. Many thanks to Khronos for their assistance through this process.

We've also submitted results on top of an Intel GPU, but that submission has been halted due to failures, and will as far as I know be updated as soon as Intel publish updated drivers.

The conformance tests have been run against our downstream fork, which is no longer actively maintained, because the D3D12 driver has now been upstreamed!

The D3D12 driver was upstreamed in Mesa in Merge-Request 7477, and the OpenCL compiler followed in Merge-Request 7565. There's been a lot more merge-requests since then, and even more is expected in the future.

The process of upstreaming the driver into Mesa3D went relatively smoothly, but there were quite a lot of regressions that happened quickly after we upstreamed the code, so to avoid this from becoming a big problem we've added the D3D12 driver to Mesa's set of GitLab CI tests. We now build and test the D3D12 driver on top of WARP on CI, as well as running some basic sanity-tests for the OpenCL compiler.

All in all, this seems to work very well right now, and we're looking forward to the future. Next step, WSL support!

I'm no longer working full-time on this project, instead I'm trying to take some of the lessons learned and apply them to Zink. I'm sure there's even more room for code-reuse than what we currently have, but it will probably take some time to figure out.