A common complaint heard about Rust is the size of the binary it produces. They are various reasons explaining why Rust binaries are generally bigger that ones produced with lower level languages such as C. The main one is Cargo, Rust's package manager and building tool, producing static binaries by default. While larger binaries are generally not much of an issue for desktop or server applications, it may become more of a problem on embedded systems where storage and/or memory may be very limited.

GStreamer is used extensively at Collabora to help our clients to build embedded multimedia solutions. With Rust gaining traction among the GStreamer community as an alternative to C to write GStreamer applications and plugins, we began wondering if the size of such Rust plugins would be a problem for embedded systems, and what could be done to reduce sizes as much as possible.

Inspired by this Tiny Rocket analysis and the Minimizing Rust Binary Size repository, here are the different strategies we tried to reduce the size of a minimal Rust GStreamer plugin.

All the builds have been done on Fedora 32 using latest stable Rust with the stable-x86_64-unknown-linux-gnu toolchain.

We built the gst-plugin-tutorial plugin from gst-plugins-rs for this experiment. In order to make this plugin as minimal as possible we removed all the elements except rsidentity, a simpler version of the identity element. We also removed the existing profile settings to build with the default cargo settings.

Let's start by looking at the size of the plugin after a normal build:

So 31M for a trivial plugin not doing much, that's quite a lot indeed! But this is a dev build which is not meant to be used in production. Let's retry using a release build:

Switching from a dev build to a release one reduced the size by a factor 11!

Let's keep those metrics as reference:

Cargo does not strip binaries and there is currently no setting to do it. We could use cargo-strip but it's easier to just strip manually in such simple example:

As the plugin is statically built, the symbols information of all the crates (dependencies) used by the plugin ended up in our binary. Stripping it removed them and so saved us a lot of space.

These numbers look much better, we already have something that should be usable in most systems. But we can still save some space by tweaking Cargo's build flags. All these settings are set using Cargo's profile sections.

From this point we'll consider only the size of release builds as that's what actually matter when distributing sofware in production. So we'll set our build flags in the profile.release section of our Cargo manifest.

By using the LTO setting and reducing the number of compilation units we can request the compiler to generate smaller binaries at the cost of a higher compile time. Let's add those settings in the profile configuration, this is done by editing our Cargo.toml and setting the lto and codegen-units settings in the release profile:

These changes reduced the plugin size quite a lot, but once stripped we notice that we actually gained only 44K.

Cargo proposes different optimization levels. Some are more fit for debugging while others are meant to achieve better performances. There is also the 'z' level optimizing for size:

We gained a few extra kilobytes:

By default, Rust can provide a nice backtrace when panicking. This can be quite handy when debugging but consumes some space which may not be useful in production builds. Disabling backtraces on panic! can save us the size of the unwinding code in our plugin.

Disabling this feature saved us some extra bytes as well:

It's important to note that this change will not only remove the panic stacktrace but also affect the behavior of GStreamer Rust plugins.

gstreamer-rs provides a macro converting panics to proper GStreamer error messages that can be handled by the application.

When such panic occurs the element will be marked as unusable but the application will continue running and have a chance to gracefully handle the problem.

By setting panic = 'abort' this whole system is disabled and the application process will abort right away.

At this point we used all the options usable with the stable Rust version. To reduce even further, we would have to switch to Rust nightly, the unstable version of the compiler. One interesting option would be to manually build libstd so it can benefits from our optimized build settings.

Extreme solutions such as not using libstd are not really an option here as glib-rs and gstreamer-rs are heavily using the Rust standard library.

So we managed to reduce the plugin size to 203K which is a 92% improvement from the default release build. Here are the final settings used:

We reached a size reasonable enough to be used in lots of embedded use cases. But how does it compare to a C implementation? We could have used the existing identity element as a comparaison but it's bundled in the coreelements plugin and provide more feature than rsidentity.

For the sake of the experiment, we re-implemented rsidentity in C using the exact same feature and APIs. It weigths 48K reduced to 15K once stripped.

So the Rust size overhead seems to be around 190K for this simple plugin. That's not unexpected as the Rust version statically link on Rust's standard library and contains all the bindings code between GLib and GStreamer.

We can use cargo bloat to list the biggest dependencies. Note that those numbers are for a pre-stripped build:

As expected the standard library is the biggest culprit here.

The plugin we used for our experimentations was very minimal. It would be interesting to look at the sizes of actual real Rust GStreamer plugins. We therefore built all the gst-plugins-rs plugins using the same build settings:

It's interesting to notice that most plugins stay in the few kilobytes range with some notable exceptions. The plugins reaching the megabyte(s) size seem to be the ones relying on big Rust crates such as rav1e or reqwest. Those are "pure" Rust elements as they don't rely on external C libraries to actually process the data, like C plugins generally do.

The AV1 encoder and decoder are a good example here. The former, libgstrav1e.so, uses the rav1e crate which is also written in Rust and so is statically linked with the plugin. On the other hand, libgstrsdav1d.so wraps the dav1d C decoder to which it's dynamically linked to, so the actual decoding code isn't accounted in the plugin size.

What about ARM binaries?

So far we only considerd x86_64 binaries, however embedded devices are generally based on ARM SoC. We were interested in comparing the size of Rust plugins when built for this architecture, and wondered if we would observe any significant difference.

We therefore rebuilt all the plugins using the armv7-unknown-linux-gnueabihf toolchain as we would do to build for the Raspberry Pi, for example.

We notice here that ARM binaries are slightly lighter than their x86_64 equivalents and the gain from stripping is very similar on both architectures.

We have to keep in mind that each size reduction technique comes at a cost: binaries that are less debug friendly, higher build times, etc. Depending of our actual needs and constraints, one needs to consider the tradeoff between ease of debugging and binary size.

It's also important to note that we considered only a single Rust plugin in our setup. The total size would grow rapidly if we would have to ship multiple Rust plugins as each one would statically ship the GStreamer and GLib Rust glue code. We'll discuss and analyze in a future blog post the options to reduce the total size in such multi-plugins scenarios such as linking all just elements into a single larger Rust plugin so they can share common code.

Based on this research, we think that Rust is ready to deploy in embedded systems with limited memory resources. Rust brings numerous benefits to embedded systems, in particular, it's as fast as C/C++ but offers zero-cost abstractions, and advanced memory safety that enable rapid development and enable easier multi-threaded programming and fearless concurrency. As the GStreamer community is embracing the Rust language for its memory safety while handling untrusted multimedia data, Collabora is happy to help you bring Rust to your embedded projects. 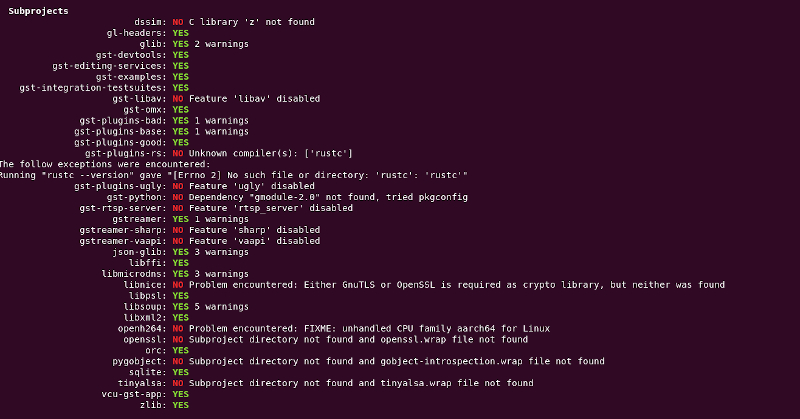